Dating back to 1977, this sports moped was recovered from a shed with leaking roof, where it had stood for over 20 years. The pictures show the sorry state it was in when we purchased it.

The Honda SS50 was the four stroke competition to the Yamaha FS1E and the Suzuki AP50. Although with similar performance, the Honda was never as well received with younger riders as the screaming 2-stokes by Yamaha and Suzuki and the professionals found the cable operated front disc brake rather odd. This was added to the 5 speed version to compete with the Yamaha FS1E DX . The Honda's  reduced appeal resulted in the Honda being produced in far smaller numbers than the equivalents. Today, the bike has become extremely rare and a quickly appreciating asset.

This bike has been re-finished in Mighty Green,  one of the more popular colours and strangely almost identical to Kawasaki green.

Manufacture was typical Honda, with bullet proof engine, modified and derived from the C50 and CUB ranges. Fuel economy was stunning at over 100 miles per gallon, although this was of little interest to the 'new' riders of the day.  To match the performance of the competition, the engine output was beefed up by fitting larger jets and a high compression piston complete with cut-outs to miss the valves, giving the machine a top speed of over 50 mph.

To overcome Britain's new moped laws, the Honda was fitted with the most complicated pedal system that allowed the rider to disengage the engine, rotate the pedals and cycle away !, at least that was the blurb in the sales brochure. In reality, it was almost impossible to pedal, but did get type approval for use in the UK.

Restoring the Honda SS50 was not an easy challenge. The 5 speed version was sold in even smaller numbers than its 4 speed predecessor and has resulted in pattern parts not being worth re-manufacturing. Missing or damaged parts associated with the cycle system are simply obsolete, great care was needed in renovating these parts without damage. The same applied to much of the chrome-work. Whilst SS50 chain guards and mudguards are available they do not fit the later disc brake model. Whilst we secured replacements from India, they had to be carefully altered to fit properly. Rims were readily available and so are the rear spokes, but the front forks were also obsolete. With help from a knowledgeable dealer, Cheshire Classic Bike Parts, we were able to purchase a front wheel for a 2008 Honda ANF125, the front hub of this commuter bike is a copy of the 1977 SS50 hub, no doubt Honda kept the tooling and reused it some 30 years later. We unlaced the new wheel and rebuilt it using the original hub since the disc fixings and speedo drive were different. Great finished wheel. Many other parts had to be sourced from abroad, including the headlamp, from the Philippines, fork gaiters from Vietnam and sundry missing engine components from KriSS Motorparts in Belgium whose mission is to keep all C and SS models alive. Many of the other smaller chrome parts have been re-plated by us.

With a full overhaul of the electrics and new tyres, this bike has rolled out looking like new, and yet we hope to have maintained the character of a bike that is 38 years old by re-using as many original parts as possible. We hope this machine will live on for many years to come. 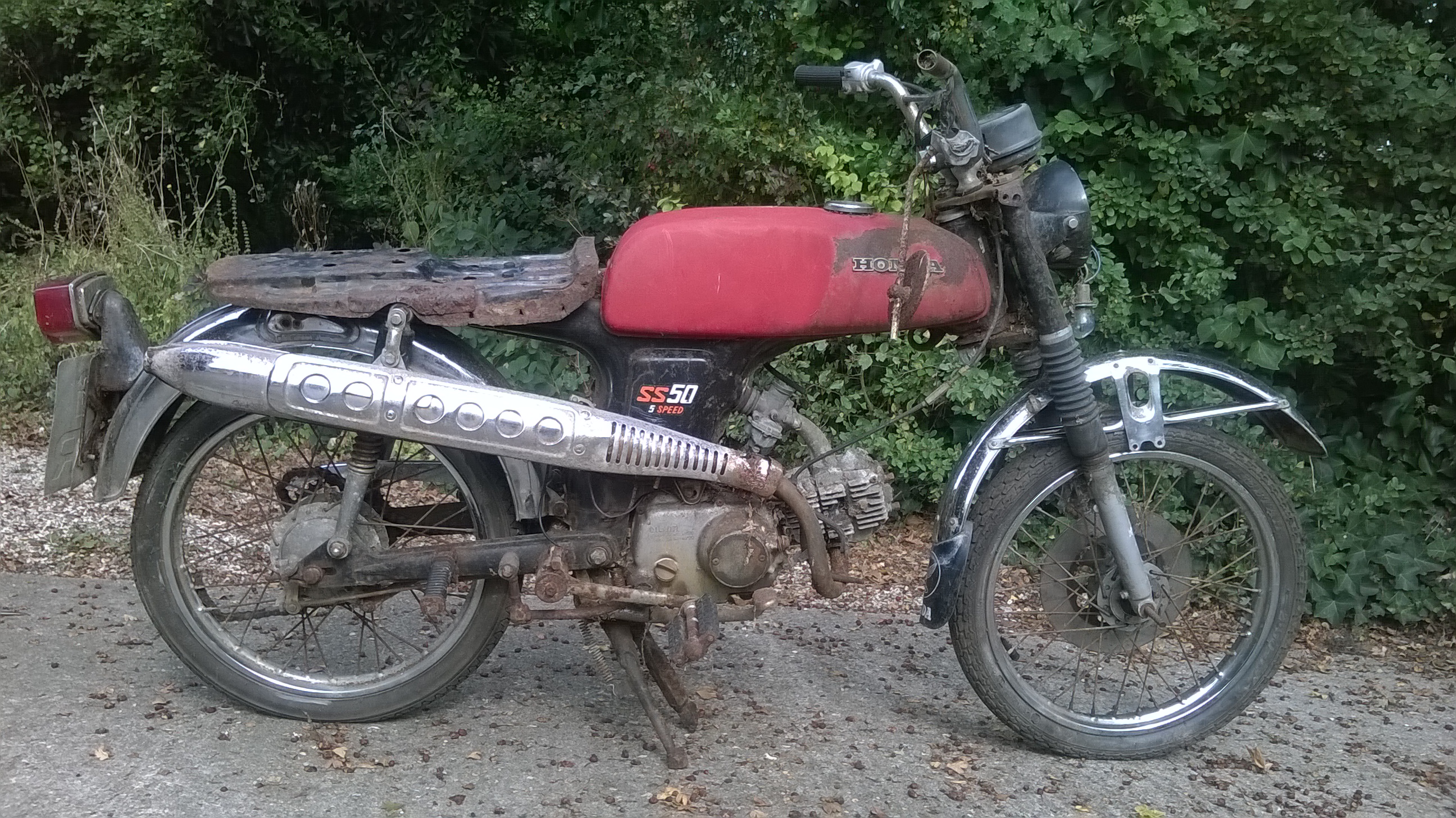 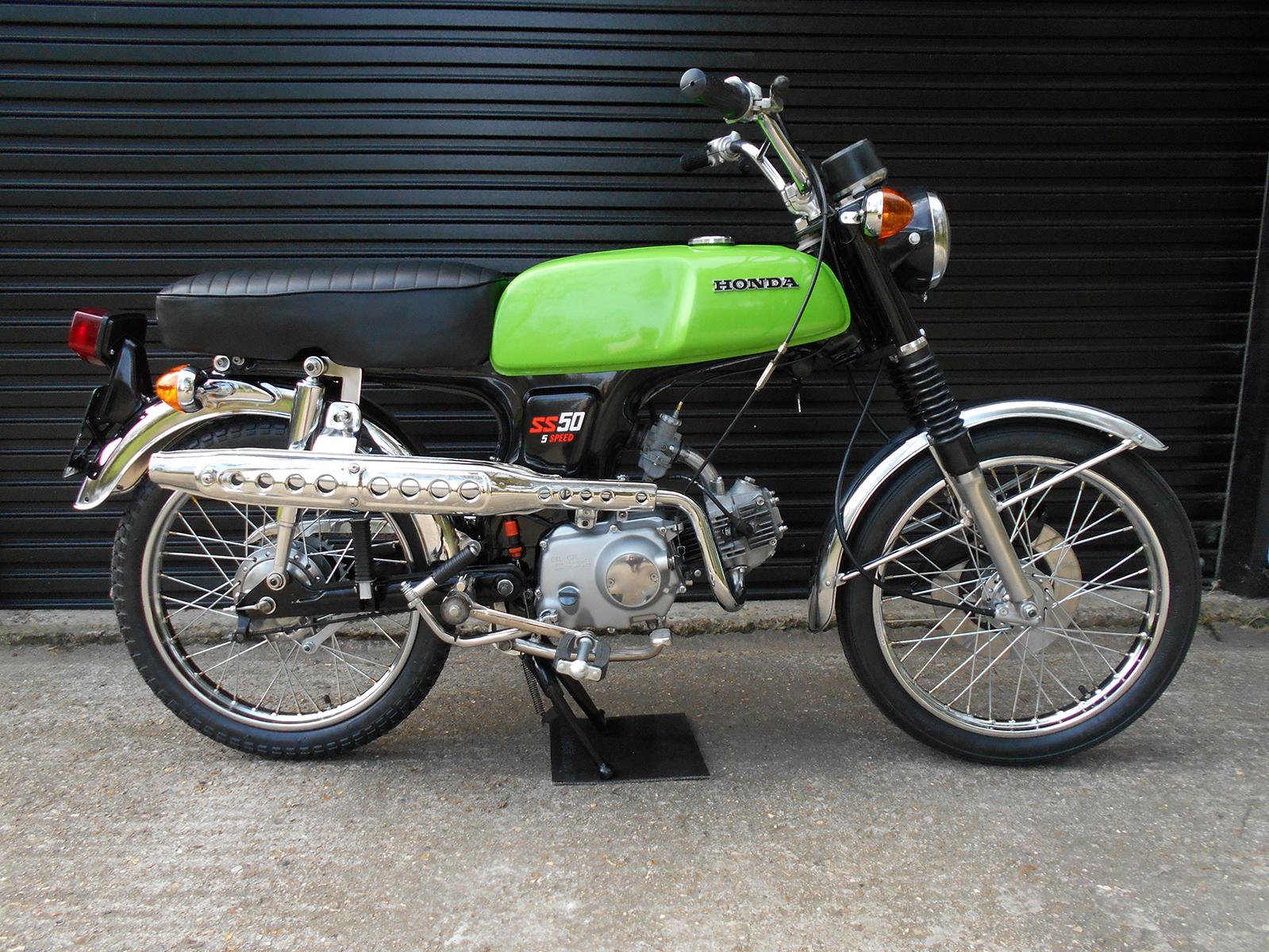